Posted by quentin on Oct 11, 2010 in Uncategorized 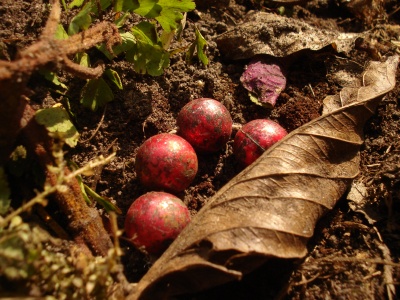 I have hopefully got your interest with these bright red {old} baubles. They originally decorated my craft stall during the festive season, were many more.These are the survivors from 1994. Plastic sure hangs around for a while, even when it has spent 16 yrs. in a compost system!

The beads entered my compost heaps by accident about the same time that I introduced red wrigglers, coincidentally the same colours.The earthworms were needed to boost the composting process in order to speed up the formation of humus and to reduce my dependency on thermophyllic bacteria which require the constant stimulation of the heap, to keep it warm/hot.Much labour needed.

The beads were noticed when I was seiving the  compost, wanted to keep as many worms as possible and remove stones etc. I was about to ‘throw them away’ when I realised that I should keep them and my seivings for the continued culture of the next heap. This action I cognised as fundamental to the organic process:

1 waste is a state of mind.we can re-use “waste’ which I regard as surplus.

2 always return to the system, conciously.

So the beads have become a reminder to me that my earthworm culture is now generations old!